What is COB led strip light?

COB, or chip on board, refers to the semiconductor technology of mounting chips onto the substrate of the PCB. This unique SMD technology is one of the competitive advantages of COB LED. The width of each chip is only small relative to the total length of the product but can allow much more chips to be mounted on the product's PCB, which can have a beneficial effect on lighting performance by increasing luminance, improving uniformity, and reducing tolerance.

What is the benefit of COB led strip light?

These COB LED strips are suitable for a wide range of applications. They can be used in the following places:

Architectural Lighting: These strips can be used to illuminate buildings and objects by mounting them on walls or ceilings. They can also be used to create unique lighting effects.

Indoor Lighting: You can use these strips inside your home or office to provide light to dark areas. If you want to create a mood, these strips can help you do it.

Outdoor Lighting: COB LED strips are very durable, so they can be installed outdoors without any problem. They are ideal for illuminating pathways, walkways, etc., especially when combined with motion sensors.

Decorative Lighting: In many cases, the aesthetic appearance of an LED strip is more important than its performance. For this reason, decorative LED strip lighting often uses COB LEDs in order to provide a wide range of colors while maintaining a small form factor. The same principle applies to indoor garden lighting or any other application where it is desirable to have multiple colors without sacrificing brightness or efficiency.

Signage: Signage applications usually require high brightness levels with consistent color reproduction over time. This makes COB LEDs an ideal choice for signage because they can achieve high brightness levels without sacrificing efficiency or color consistency over long periods of time like some traditional lighting technologies do when they are subjected to large amounts of the current draw or frequent start/stop cycles. 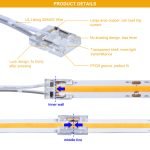 In order to make your own COB LED strip light, you will need to cut the tape and then solder the wires. Here are some tips on how to do it:
1, Cut the tape at the desired length with scissors or a knife. The best way is to cut it into segments of equal length (if possible).
2, Remove all the protective paper from each segment with tweezers or your fingers. If any of them remain stuck on the surface of your strip, use a piece of sandpaper or a knife to remove them carefully so as not to damage your strip.
3, Twist each segment until they come off one by one (the procedure is similar to when removing a single piece from its backing paper). Once all your segments are removed from their backing paper, you should have something like this:
4, Now connect two segments together by twisting them so that there is no gap between them - this will form one continuous segment that can be bent around corners, etc. This can be done in various ways depending on how many segments you want to connect together.

Can you custom made COB led strip light?

Is it possible to dim COB LED Strip Light?

Yes, it is possible to dim COB LED Strip Light, but the LED chip is not dimmable. But if you want to control the brightness, you can use some dimmer switches or DMX controllers at the end of the strip lighting.

What is the lifespan of COB LED Strip Light?

The lifespan of COB LED Strip Light depends on how often you use it and how well you maintain it. If you use it daily for more than 10 hours a day and do not clean it regularly, then the lifespan will be much shorter than if used less frequently and maintained properly with dusting and cleaning tools such as brush dusters, etc.

What is the difference between SMD and COB LED? 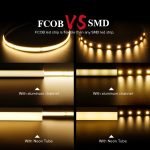 SMD (Surface Mounted Diode)
SMD is a technology used to mount LEDs onto the circuit board. The surface of the chip is mounted on the substrate and then covered with resin. This is the most common way for small-sized LEDs to be mounted. The advantages of SMD are that it is easy to assemble and can be manufactured at low costs. But it has some disadvantages such as light loss, heat dissipation, and aging problems.
COB (Chip On Board)
COB LED is an advanced technology compared with SMD LED. COB LED has an aluminum die-cast shell on its surface and the chip itself sits inside the shell, which makes it a more integrated design than SMD LED. It has better heat dissipation performance than SMD LED because all the parts are connected together by PCB board rather than only being connected by solder joints on its surface as SMD LED. Compared with SMD LED, COB LED also has a much larger light source size and power density due to its large area of light source chip, so it also saves a lot of space and simplifies installation.

COB LED Strip Light is a kind of miniaturized LED strip light. It can be used as general lighting in the house and garden or used as decorative lighting in commercial buildings or hotels.
Compared with traditional single-color LED strips, COB LED strip light has more advantages: high brightness, long lifespan, easy to use, small size, and energy saving. Therefore, it is widely used in hotels, restaurants, supermarkets, and other places.
As for whether COB LED Strip light needs a LED aluminum profile for heat dissipations? The answer is yes. COB chip is directly connected with the PCB board by soldering wire instead of mounting on the heat sink separately like traditional COB chip products. Therefore, it needs to have an appropriate cooling effect in order to ensure its working life without any problems caused by overheating.

With LED strip lights becoming more popular it is important to understand the basics between COB and SMD strips. There are many benefits that each solution can provide you and your business but you should choose the best option for your current project. If a quality product is what you are looking for then COB LED is your answer.

The LED chip in COB is directly connected with the PCB board, removing the lamp bead holder, frame, soldier points, and the golden wires you’ll find in a traditional SMD.

What are COB LEDs?

COB stands for Chip On Board, also known as flip-chips. In easy words, the chip is attached directly to the PCB, making them more flexible and less space-consuming.

Advantages of COB LEDsWhat is COB?

Here are a couple of advantages you’ll get while using a COB strip.

COB LED strip has a smooth lightning source instead of a big bright dot that you can see in SMD strips. The light won’t feel sharp to your eyes since it is spread properly instead of targeting a center dot.

The hotspot on normal SMD flex stip is visible to the human eye if the light is relatively close to the surface or if the strip is visible. In contrast, COB strip gives a soft, steady light that shines from end to end and looks attractive even with no lightning dot.

The COB strips are the best for:

Thanks to their small size and uniform light distribution, COB strips offer more flexibility. You can easily fit them in a tight area; they won’t pop out as often as an SMD strip since they are light.

COB strip design uses three chips—one in parallel, one in each group, and one in series to form a step. Even if one or two chips stop working, the strip will continue producing light and won’t produce dark areas.

COB LED lights have a beam angle of 180-degrees, compared with 120-degree angle of SMD LED strip lights, the area of lighting is much larger.

While COB has multiple advantages, you’ll also experience some disadvantages.

COB chips go through no binning stage when in production; therefore, color consistency is not guaranteed across the strip length. It’s difficult to ensure that 100% are within the 3-step color tolerance.

COB chips are not encased, increasing the likelihood of damage

It will be hard to find COB stripes bigger than 5 meters in length. For the SMD LED, the constant current strip can achieve 20-50m per roll.

Lifespan is predicted rather than tested—no LM80 data.

The maximum power you can get from COB LED is 15W. Any more than that, and the chip will likely heat up and burn. COB LED strip light efficiency is currently only about 120LM/W. If you need higher light efficiency, SMD strip will be a better choice.

SMD LED, it is a light-emitting diode in Surface Mounted Package.

SMD LED package is basically a plastic casing that houses phosphor and an LED chip.  The LED chip, made of semiconductor material, emits light (blue light) while the phosphor material is responsible for converting some of the light into red and green wavelengths. These combinations end up producing the white light that is produced by an LED package.

There are wider power range options for SMD led strips (5W-40W）; some can achieve lumen output up to 180lm/W.

SMD lights can live up to 100,000 hours, making their lifespan twice as much as a COB. Most companies offer a money-back guarantee on SMDs but not on COB LEDs. LM80 report available

An SMD can provide up to 95+ CRI ratings, while a COB can offer the best ratings of 90+

With 3oz of copper in the printed circuit board, you can expect solid durability from SMD LEDs.

Up to 3 SDCM CCT consistency is guaranteed from batch to batch and reel to reel.

Compared to the COB, SMDs have a narrow beam angle.

This is best for indoor use as not waterproof at all. You can set up these in your cabinet, bedroom, or living room.

IP65 – This COB LED strip has a silicone sleeve and is perfect for outdoors. They can handle low water pressure, so you can also use them in damp areas as long as you don’t submerge them into the water.

IP68 - This COB LED lighting is a silicone sleeve with fully silicone gel filling. You can submerge this kind of cob strip light into the water.

4. Can COB LED Strip Be Dimmed?

COB LED strips are dimmable as well as regular SMD led strips. You can use DALI, Triac, PWM, and a 0-10V dimming power supply to use with COB LED strips to achieve dimming.

KayTai is a professional COB led strip light manufacturer in China. If you need some COB strip light, pls contact us!